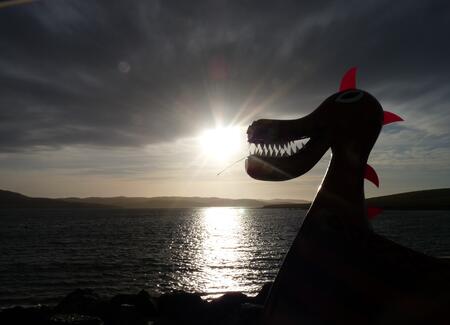 Northmavine’s own version of the great Viking fire festival happens every year on the third Friday in February.

“We don’t burn our galley in a playpark” went a legendary song about the Northmavine version of Shetland’s famous viking fire festival. No, the longship burns out on the water in one of the most spectacular of all the isles’ fire festivals.

The annual Northmavine Up-Helly-Aa celebrates the end of winter and the return of the sun. Various squads of guizers meet secretly throughout the winter, planning the theme for their act or skit which they perform in various local halls on Up-Helly-Aa night. This is often a humorous take on a story from the local or national news.

On the third Friday of every February, the guizers dress up in themed costumes and, with flaming torches lighting up the dark winter sky, the procession makes its way from the Hillswick Hall along the main road to the loch at Urafirth. The procession is led by a squad of Vikings, the Jarl Squad, headed by the Guizer Jarl who is the specially chosen leader for that year. A brass band provides the rousing music for the traditional Up-Helly-Aa songs, and spectators line the route as the Jarl Squad pull a Viking galley to the burning site. The flaming torches are thrown into the galley, and as the guizers and onlookers disperse to a night of revelry in local halls, the galley is left ablaze on the water, like a mythical Norse funeral pyre.

Each year, three of the four local halls used - Hillswick, Ollaberry, North Roe and Sullom - take it in turn to host Up-Helly-Aa. The guizers go from hall to hall through the night performing their act. The other hall then hosts the
Hop the following night. If that isn't enough revelry, guizers and those directly involved in Up-Helly-Aa attend the Return night around a week later, where they can see each others acts.

Various Up-Helly-Aas are held all over Shetland through the winter months, with Lerwick's being the largest with around eight or nine hundred guizers. The Lerwick Up-Helly-Aa is very much a male affair, whereas the country festivals, including Northmavine, welcome men and women.

Tickets for the halls are very much in demand and go on sale, as advertised in The Shetland Times, a few weeks before the big event. They are available only in person and you will have to queue - or get someone else to do it for you.