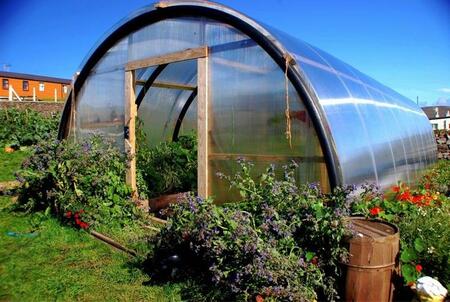 The Polycrub is a gale-proof, hard-polycarbonate clad version of the well-known polytunnel, built using recycled salmon farm pipe. Designed and manufactured to kit form in various sizes, in Northmavine by NCDC subsidiary Nortenergy, Polycrubs are exported all over the world.

The ‘Polycrub’ concept began as an NCDC community project in 2008. Our community was keen to reduce food miles and grow more fresh produce locally.
Nortenergy is based in Northmavine, Shetland and is a successful social enterprise.
Profits are reinvested  in Northmavine to create positive social change by supporting community-based projects.

The ‘Polycrub’ concept began as an NCDC community project in 2008. NCDC was keen to reduce food miles and grow more fresh produce locally.
Grant aid from the Climate Challenge Fund meant that 12 community polytunnels could be constructed in Northmavine. Each building was split into shared plots and almost 50 people were able to grow undercover.

These growing spaces had to be able to stand up to the Shetland weather so, before the project began, various design ideas were considered. These were developed to create a structure that would withstand Shetland’s harsh climate.

NCDC had been approached to find an alternative use for redundant equipment from the aquaculture industry which, at that time, was either being sent to landfill, or littering shorelines.Those waste materials were incorporated in the design of the structural hoops.

Once the community growing project was complete, it attracted lots of interest from other community groups and individuals who wanted to buy the design. The structures were branded as ‘Polycrubs’ and have been sold in kit form as far away as France and the Falklands.

Polycrubs are now popular with individual growers who need a robust growing space. Many schools and community groups have been able to access grant funding for Polycrub growing projects. Crofters and farmers with plans for crofting diversification could also be eligible for funding support through the agricultural grants system.

Polycrub has structural accreditation. The designs are subject to copyright and Polycrub® is trademarked.

For more information go to: www.polycrub.co.uk